An Apple of Gold

A word aptly spoken is like apples of gold in settings of silver. – Prov. 25:11 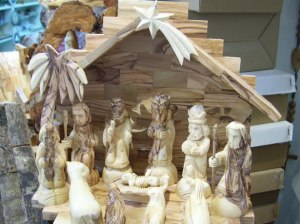 I have now packed away our Christmas decorations for another season. However, one thing caught my attention in a special way as I was putting away our nativity scene.  At Christmas I read about Mary wrapping Jesus as a baby in swaddling cloths and lying him in a manger.  (see Luke 2:7 NKJV) The next time I read of Jesus being wrapped up is when Joseph of Arimathea wrapped his body in linen grave cloths and laid it in a tomb.  (see Luke 23:53)  Big changes took place in the life of Jesus between the time when Luke records the Christmas story and the Easter story:  a baby to a man – swaddling cloths to grave cloths – a manger to a tomb!  I ask myself, does my understanding of Jesus allow him to grow up? Do I look beyond the manger to the cross and even beyond the cross?

Jesus did not stay a tiny baby.  He was soon kicking off his swaddling blankets and crawling around the feet of Mary and Joseph rather than just being held in their arms.  The only thing scripture that really tells me about Jesus growing up is Luke 2:52, “And Jesus grew in wisdom and stature, and in favor with God and man.”  The next thing I read about Jesus is his baptism and ministry when he is 30 years old.  Three years later Jesus is again wrapped up, but this time it is after he has died on the cross. Jesus kicked off these grave cloths three days later at his resurrection.  Jesus grew up during those 33 years.  He could not have died as my savior as a baby; He had to grow up.

Now I have to ask myself another question.  Am I too wrapped up in my daily life to take time to grow in my relationship with Jesus?  Do I keep Him wrapped up in swaddling cloths as a baby?  If I desire to grow in my relationship with Jesus, how do I do it?  It is interesting to note the difference in the way I am able to grow spiritually and how I grow physically.  When a baby grows physically, he or she grows bigger and becomes more independent.  In order to grow spiritually, one grows smaller and becomes more dependent.  John the Baptist says in John 3:30 NKJV, “He (Jesus) must increase, but I must decrease.”  If I am to grow up spiritually I must become smaller in how I perceive myself.  I must think less about what I can achieve and more about how I can glorify God.  This is the only possible way for Jesus to grow in me.

My Reader, I ask you, at what age does Jesus live in your heart?  It is fun to celebrate Christmas, and indeed we should celebrate the birth of Jesus.   However, do not let Jesus stay a baby.  Allow Him to grow up by growing in your faith.  A baby must be fed to grow, so must you feed on His Word in order to grow in your knowledge of Him.  God’s Word can be both milk for spiritual infants and meat for men, so feed on the Word.  (see Hebrews 5:12-14)  As you allow your understanding of Jesus to grow from his being an infant to being a man, you too will grow spiritually. Then He will be able to live more powerfully in you.  In fact, the resurrection power that allowed Jesus to throw off His burial cloths will be available to you.  (see Philippians 3:10)

Today is a milestone birthday for our son. Today is also my birthing day. I remember when the umbilical cord was cut and I was able to hold our son in my arms. I had felt his movement for several months, but this was the first time I could see him and his resemblance of his father. I could count his fingers and toes and not just feel his fist or foot jabbing into my ribs.  There was something very special about the first time I held our son as a unique little being who still depended upon me for food and care. However, the cutting of the umbilical cord was also the first letting go of the son who had grown inside of me for the last nine months. The cord was cut, but I still had my apron strings tied around him and there was a lifeline that existed between our son and me.

God the Father said of Jesus in Mark 1:11, “You are my Son, whom I love; with you I am well pleased.” I wholeheartedly agree with this statement and say to our son, “Greg, you are my son, whom I love, with you I am well pleased.” He now not only fulfills the role of being our son, but he is also a husband and father. By profession, he is an anointed teacher whether he be behind the desk in a school classroom or in the pulpit at church. Truly he is successful both in the natural and the spiritual realms. We are especially blessed by our son this year as he has been named the New York State Teacher of the Year for 2013. The Lord is using him in mighty ways whether he is traveling or speaking or attending committee meetings and conferences.  He is a positive spokesperson for  teachers, students, and education across the state. Psalm 139:16 assures me that God has written all of Greg’s days in His book and these days have been fashioned for him. If I had not been willing to let him become the godly man the Lord purposed him to become, this honor may not have been possible for him. However, whether he received state recognition or not, we are pleased when we see the man of God that Greg is today. It is not because of who I have been as a mother, but who God is as his Heavenly Father that makes all the difference. I am glad I have surrendered Greg’s life to the Lord and have not held him too tightly in my own hands. The truth of Proverbs 22:6 has been fulfilled with our son. “Train up a child in the way he should go and when he is old he shall not depart from it.”

First the umbilical cord was cut, and then gradually I untied the apron strings from being his 24/7 mom. The amazing thing is that as I let these strings be untied, the lifeline relationship between mother and son has become even stronger. According to Ecclesiastes 4:12, “a cord of three strands is not quickly broken.”  Our cord of mother, son and the Lord has not been broken among us. Allowing the Lord to be one strand of this cord has made all the difference in our relationship.  The umbilical cord was purposely made  to be cut while the biblical cord was fashioned to remain intact.

The best birthday gift I can give to our son is to unclasp the grasp of my own hands and leave him in the hands of God . I need only grasp my own hands together in prayer for him. If I held him too tightly, his life could become stagnant like a pond of water that has no fresh water moving into or out of it. I could squelch God’s grace and stagnate God’s gifts. I must allow God’s grace to flow through Greg. Grace is received, but grace must also be given away.  I annually release our son in order for him to be able to receive the birthright of blessings God has in store for him. I am blessed as I allow Greg to be a blessing.

Yes, today we celebrate his birthday and we say publicly, “Happy Birthday, Son!” But in the privacy of my heart, I recall the happiness of my birthing day when this special person whom God knit together in my womb, who was fearfully and wonderfully made, made his first appearance into this world. (see Psalm 139:13,14)  I thank God for allowing me to be Greg’s mother. For this reason, I too celebrate today in a personal way.